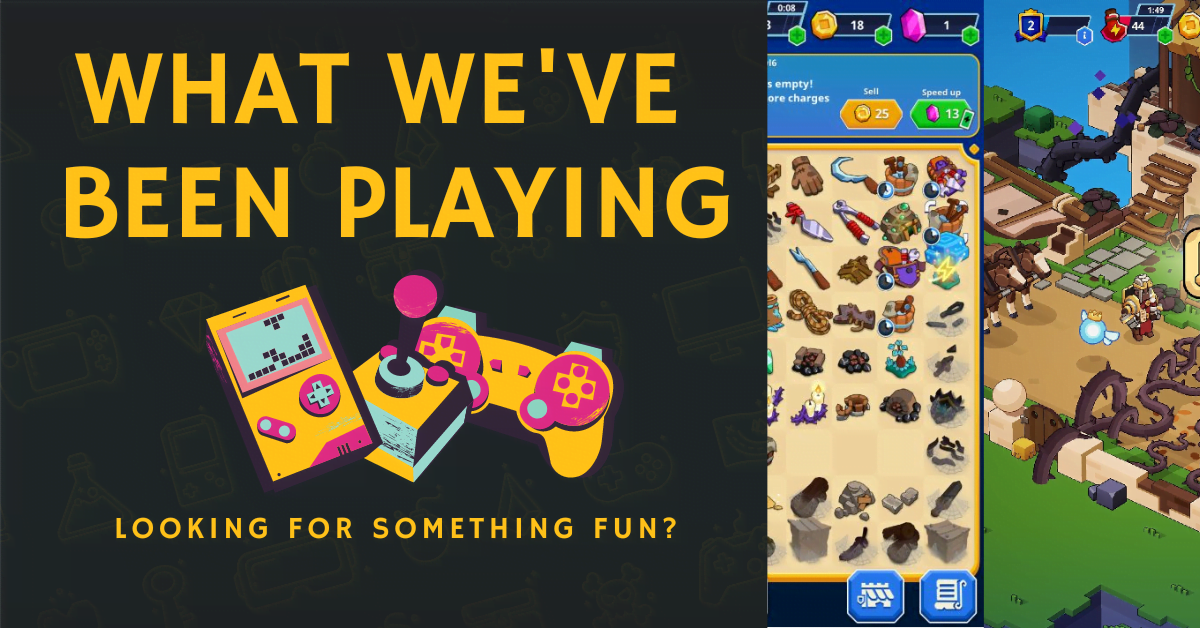 I recently went to a remote meeting for the International Game Developers Association (IGDA) where game devs were there to answer questions for folks interested in the industry. Near the end, the questions get less serious, and one of the final ones was this: What do devs play when they’re not working? Believe it or not, most of them said they play a lot of casual phone games, because at the end of the day, they want something that will just give their brain a break, and let me just say… same.

And one of the things I’ve really gotten into (don’t make fun) is merge games.

You know what I’m talking about. We’ve all seen the ads.

If you’ve somehow managed to avoid the genre, merge games are the kind where you’re set up with a board filled with a mish mash of items, and you drag them onto their copies to create new items, which can then be merged to create even higher level items, and so on and so forth. You generally are given quests which require one or two items, and you have to merge until you have those objects and can turn them in. 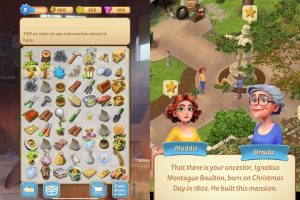 The first one that got me was Merge Mansion. The ads were ridiculous (and really had nothing much to do with the game at the time, though the narrative suddenly shifted recently with some ad-plot-inclusive retconning), and I was hooked. In it, you are fixing up and old mansion with your grandmother. (Kind of—mostly you fix up the mansion grounds and never go inside, but I guess that’s not really important). There’s also a city worker who visits a lot to talk about permits and flirt. But these games are all about making you want to spend real money, which I’m ok doing to a point. (I subscribe to the “have I had $X amount of fun? Then I can spend $X on this boost!” model.) But, of course, the game is designed to make me spend larger and larger amounts, which is not my style, so when I ran out of moves, I’d avoid the compulsion to spend and put the game down… But that was really hard, so I did something kind of silly: I got another merge game.

Merge Mayor is the one I chose. You’re fixing up a little city, and it’s a more cutesy (with a 3D art style, no less!), and it served very well as a backup distraction.

I reached the endgame. That’s right. On both games, I have gotten to the end, so now it’s just side quests and events when they’re offered, which doesn’t leave a merge addict with much to scratch that swapping and combining itch.

So what did I do? 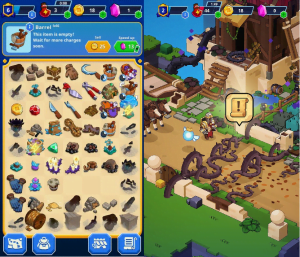 Got another merge game! Medieval Merge, to be exact. At first, I thought it might be my favorite one so far. The story is very involved and so much fun. As someone interested in game writing, I really enjoy seeing how even the games you don’t expect to be very narrative driven (moving items on top of other items on a board? Where’s the story?) manage to incorporate action and intrigue into their gameplay. Medieval Merge does this excellently. There are trolls to defeat, monsters to vanquish, citizens to assist, and a malevolent, creeping plague of vines to beat back. Just like any game, there are essentially side quests and main quests (though you generally end up doing them all so that you meet experience requirements for unlocking new areas), and Medieval Merge really makes those quests feel like they have a real purpose.

Merge Mansion feels like a merge game with a story fit in out of necessity. (And one that seemed to change without notice,  retroactively being altered to fit the story to the more exciting and mysterious ads they’ve been pumping out.) The in-game story seems mostly to be about a young woman discovering different areas of her grandparents’ estate, but the ads are all of mystery, murder, arson, jail, hidden secrets, and deception. 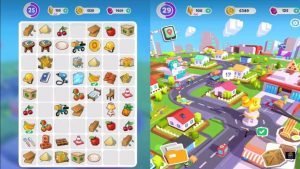 Merge Mayor is a bit more straightforward. You’re fixing up a cute little town, simple as that, with a few little storylines throughout, like needing to build this bridge or open that park or create this public service. It’s cute.

Medieval Merge, like I said, though, is the most engaging from a narrative perspective. They very nicely walk the line of having many story interludes without having too many story interludes. A wanna-be warrior and her “puffball” sidekick come in to help a medieval village stave off a mysterious and damaging growth. They also encounter monsters and, while they want to beat them back as they work to rebuild the town, they find that they’re not yet ready for the big-big beasts yet. The game has a lot of humor as well as fun animations and a cute, chunky art style. This is the only one I’ve encountered where I’m interested in seeing where the story goes, rather than just satisfying that desire to check quests off a list.

But the actual gameplay on Medieval Merge is a bit lacking, in my opinion. I’m not super far in the game, but the quests are very repetitive, asking for four flowers only to turn around and require two flowers and ask for three more when you’re done with that. It gets exhausting. There are also a lot of “hidden” generators, where you have to combine items from one generator to make a new one to get the items from that to complete a quest. Many people like this mechanic, but it’s frustrating to me. I hate getting a quest and having no idea how to complete it and being forced to turn to the internet to see what hidden, multi-step process is required to satisfy the requirements. How am I to know that to get a pile of rugs, I need to merge building pieces to make a barn so I can get grass to merge enough hay to make needles so I can eventually merge up to a loom which will, in turn, give me rug pieces to merge? To me, this is annoying.

Still, I can’t put it down. I want to help the townsfolk, defeat the monsters, and see where the story takes me. The other two games get me on the gameplay, and this one gets me with story. By their powers combined, I have a nice little timesink where I get to turn off my brain or maybe idly entertain myself with a podcast or TV show in the background. It’s a great way to wind down.

Mobile games get a bad rap, but they can be a great way to escape and unwind, and not all of them are “turn your brain off” games. I’ve found some really cute RPGs and puzzle games that I’ve enjoyed diving into as well. It’s fun to see how mobile gaming has and continues to evolve, and it can be really interesting too to see how the same popular genre gets interpreted by different companies. I think there’s still some stigma attached to mobile gaming sometimes, but I don’t think there has to be, so merge on… or whatever your preferred mobile adventuring entails. If you’re having a good time, that’s all that matters.